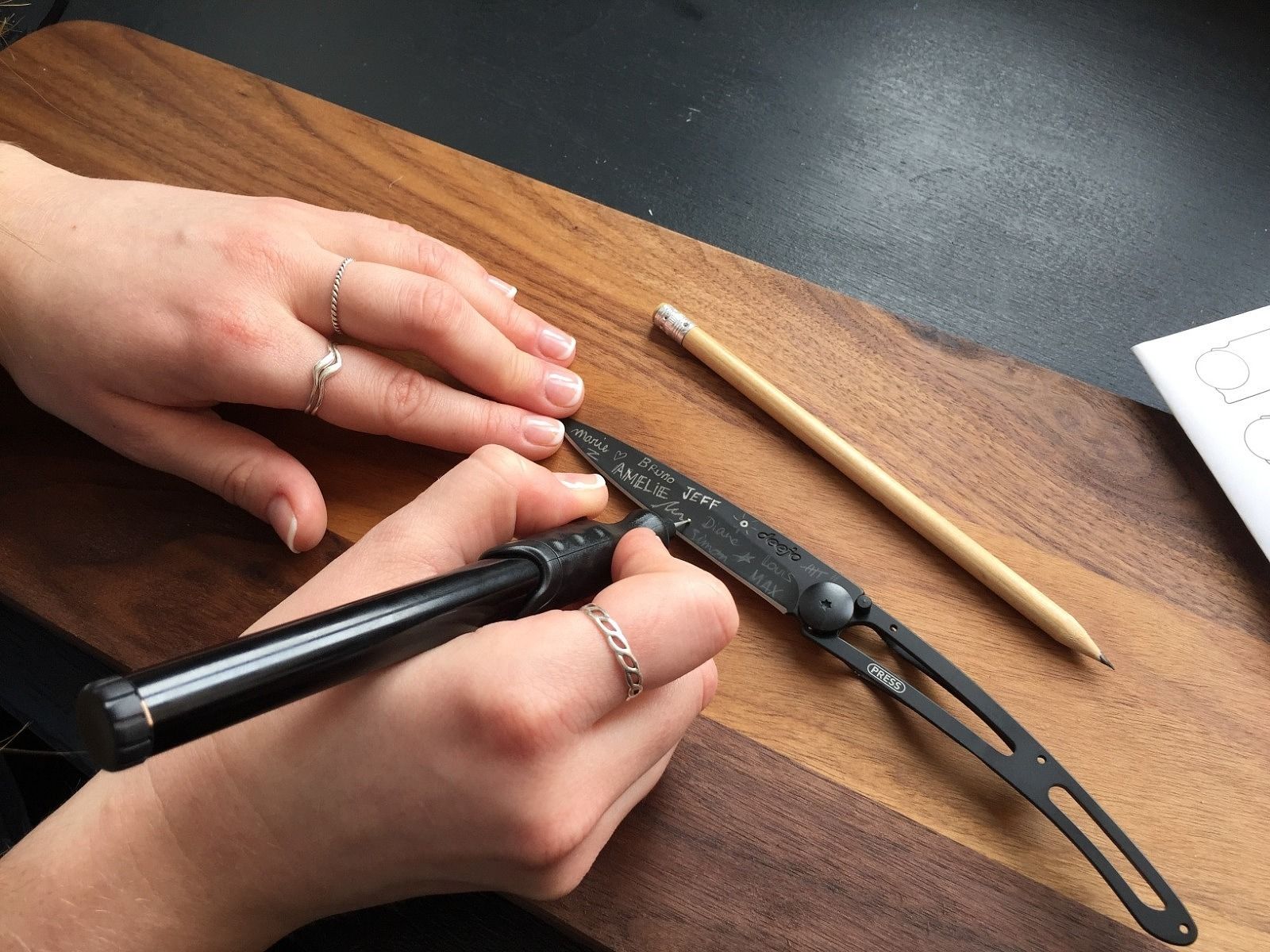 DEEJO IN THE LAND OF THE RISING SUN

Long inspired by cultures around the world, Deejo has been enchanted by the sweet scent of cherry blossoms, which today inspires the brand to create a set of steak knives in honor of the land of the rising sun. On this occasion, Deejo invites you to discover Japan’s culture and history. 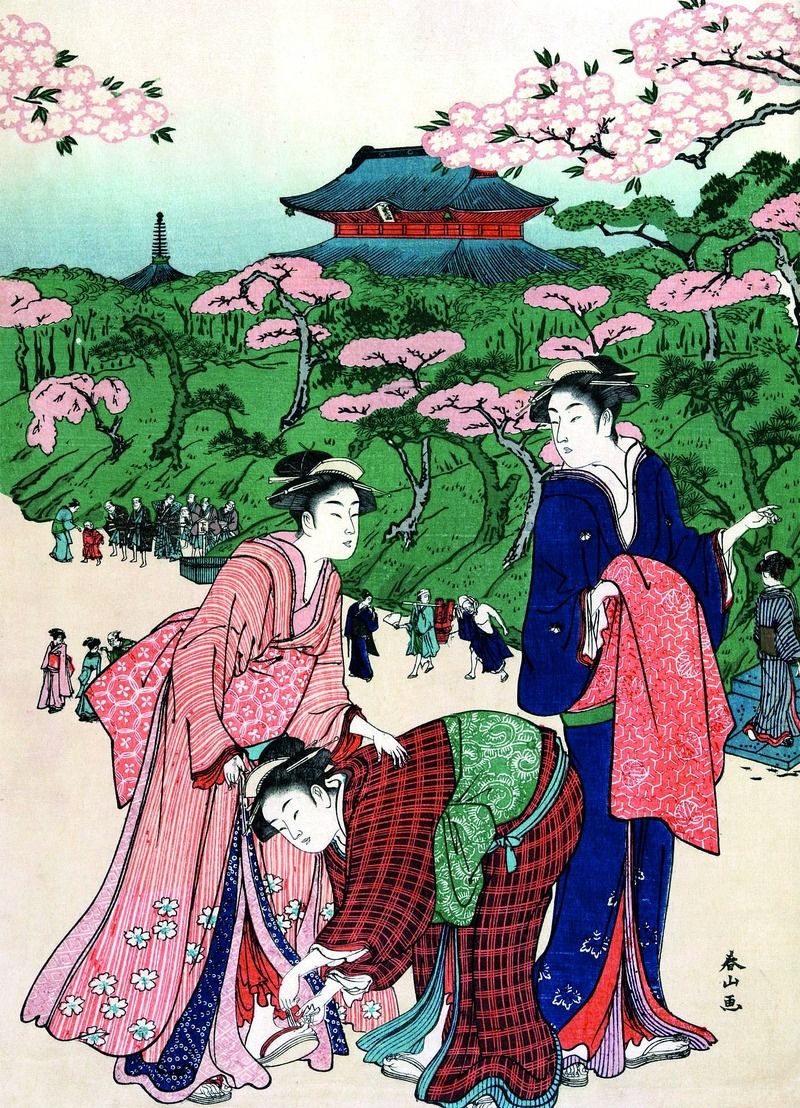 Over the years Deejo has traveled the world in search of inspiration to decorate the blades of its future companions. It goes without saying, the brand has traveled to more than a country or two: from the tribal tattoos of Polynesia to the snow-capped mountains of Central Europe, many cultures have come to anchor themselves on the blades of these knives which never shy away from a new genre. And even if this thirst for inspiration guides the young French brand in an ever-greater quest, one theme emerges regularly, to the delight of its tattoos: Japan.

A culture as rich as it is diverse, the Land of the Rising Sun wields a rare influence on all areas of our daily life. Dance, history, technology: from martial arts to state-of-the-art motorcycles, through literature and famous gastronomy, it would be unlikely not to have crossed paths with this melodious language of the Far East. Who hasn’t eaten sushi, sung karaoke, sent emojis, or even read manga?

Apart from these themes, Japanese culture has made an incredible imprint on the history of tattooing thanks to its unique history and symbolism, and it is only natural to have a formidable presence on the blades of Deejo knives. In homage, the French cutlery brand looks to the bigger picture, highlighting classic Japanese aesthetics on a set of 6 of the most sophisticated steak knives. Typical landscapes of the archipelago, authentic clothes, and the Japanese lifestyle are drawn into these exotic tattoos. Tattooed to read like a tale, each blade holds its secret, its universe, and lets our imaginations visualize this one-of-a-kind atmosphere that can only captivate and enchant. 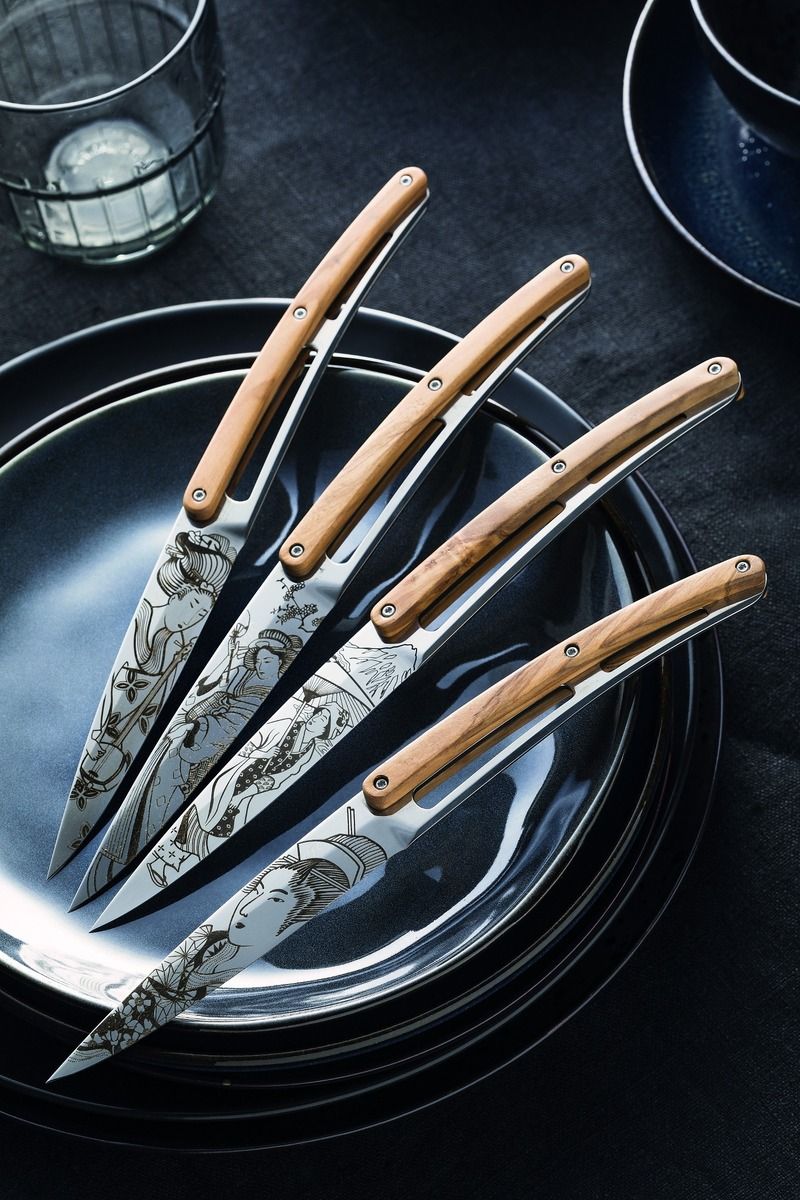 Indeed, Japan has developed a unique culture with a drawing style characteristic of the land, easily distinguished from its Asian neighbors. Several movements specific to the archipelago now radiate internationally, such as the ukiyo-e style, from which Deejo draws inspiration to represent the figures of this set. Signifying the ‘floating world’, the artists of the time looked at themes of everyday life, long before Europeans were interested in such.

From the merchant’s wife to scenes of city life, all subjects offered a rich legacy for understanding the society of that time. With its light and fine line, the corpus of ukiyo-e prints represents the common life of the archipelago without pretension, to the delight of Deejo’s inquisitive curiosity.By the grace of this rich heritage, Deejo immersed itself in these historical memories to transcribe them on its blades.

The character portraits are varied, and Deejo would be hard-pressed to ignore that the set is not complete without the samurai, depicted on the third blade. Valiant warriors, these soldiers left their mark in time by their exceptional practice of martial arts and, above all, their disciplined adherence to a strict moral code, going so far as to kill themselves in the event of defeat or dishonor. Apart from a force of arms and spirit, the samurai is also a man of letters, and his strict education included reading and writing as well as combat. It is this cultural balance that Deejo has transcribed on the blade dedicated to him: sword in hand and ready for battle, the samurai trades armor for an elegant kimono, a classic garment of the male wardrobe of this era.

But this emblematic figure is only one part of Japanese culture: many other cultural riches of the time have made their impact on history. Among these, the illustrators at Deejo felt passionate about the traditional outfits and costumes of the land and were greatly inspired by the wealth of women’s wardrobes of the time. The hairstyle is equally fascinating, and the female representations in this set are illustrated by its originality. Each adorned with kanzashi (hair ornaments including combs, chopsticks, or even seasonal flowers), the hairstyles are distinguished between each blade. Reserved for ceremonies and artists, the hairstyle of the sixth blade impresses with its dimensions, while those on the second and fourth blade are more typical of the daily life of a high-ranking woman. This complexity is also revealed on the drapes of their kimonos, where each reveals a fabric with a unique pattern.

It would be impossible to talk about Japanese elegance without evoking the geisha, a true leitmotif of Japanese arts. Mistress of the arts, this woman of culture learned song, dance, music, and theatre, whose sole duty was to entertain the wealthy merchants and samurai who came to relax in the tearooms. Accustomed to metropolitan cities, within the internal world of the tearoom these artists wore daily long kimonos in different colors and patterns, without knowing physical work or hard labor.

In homage to these exceptional characters, Deejo devotes two of its blades to their talents: the sixth blade focuses on a geisha in full performance, wielding the shamisen, a Japanese variant of a long-necked lute, and wearing a hairstyle as complex as her talents, while the first blade combines the bewitching charms of these powerful women, in a flowered kimono and sporting a traditional Japanese fan.

These figures may be the central theme of these blades, but it would be difficult to evoke Japan without also dwelling on its poetic landscapes. From the cherry blossom festival to the maritime coasts, the enchanting landscapes of the archipelago were one of the first sources of inspiration for Deejo’s tattoos. Featured on the fifth blade in the collection, Mount Fuji triumphs in the background, while the island's unique flora and fauna can be found on many Deejo pocket blades. Koi carp, Japanese dragon or Cherry tree, Japanese inspirations are drawn on different models, allowing you to carry away a small sketch of Japanese art and its wonders. Finally, between geisha and samurai, mountain and cherry tree, the beauty of Japanese legend reigns in this subtle bond that unites each element of its culture. More than a voyage, it is a balance of grace and homage that Deejo offers each of us to rediscover at our lunch and dinner tables. 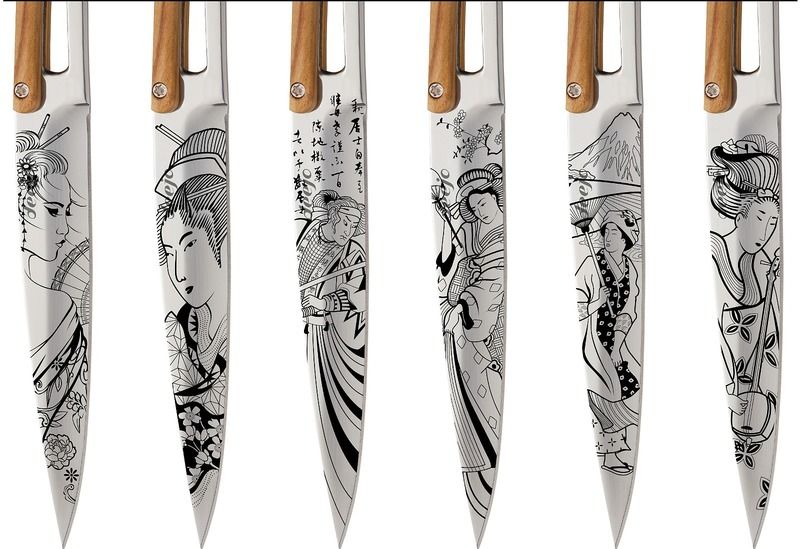